I cannot stop playing Junkrat in Overwatch! He’s amazing, you can spam pills for days and almost everything I know about playing Team Fortress 2‘s Demoman ported over into Junkrat. His concussion mine is my favorite weapon in the game, basically being a single-clip Sticky Launcher that doesn’t self-damage, and his additional abilities such as the bear trap and the Riptire are new mechanics that perfectly complement his playstyle. Anyone who mained Demoman in TF2 definitely needs to try him out, though I hope you mained the grenade launcher like I did because it’s the cornerstone of the loadout, not the backup secondary like in TF2. I pretty much lucked out with Junkrat, he’s got my exact Sticky Jumper playstyle but without falling damage or the need to worry about running out of ammo.

I made a video for anyone who’s played Junkrat and wants to learn some easy tricks that might not be noticeable at first glance. And of course, literally the day after I post said video this thread shows up on Reddit adding what would have been a perfect bullet point for the video. Sigh.

But Junkrat’s traps are definitely worth a closer look, because they are actually rather interesting mechanically. As the Reddit thread mentioned, they will use healthkits if damaged, which is simply fascinating and I hope Blizzard doesn’t patch it. After all, Omnic characters like Zenyatta are healed by healthkits, meaning they must work on machines for undefinable reasons, and considering healthkits are already pretty silly even when applied to humans, I can’t complain. The practical tricks this mechanic brings up are fascinating, and not just for Junkrat. Torbjörn can plop his sentry on a healthkit and it gains a secondary form of healing, often at the expense of area coverage or field of vision. Symmetra’s teleporter is fragile enough and could definitely use the protection, although the healthkit itself increases the chance of map-savvy opponents stumbling across it in search of health.

While researching Junkrat’s traps for this article, I learned one other bizarre quirk that probably qualifies as a bug:

Junkrat’s traps can be placed on basketballs, turning them into the most bizarre ranged trap you can get in Overwatch. This trick is actually way more effective than it may appear at first glance; the Conc grenade in particular is effortless to place and decently easy to melee to the point, and the bear trap has a pretty generous hitbox that gives it Hanzo-like ability to latch onto unsuspecting opponents. There’s nothing better to do while stuck in spawn, why not prepare a Bouncing Betty and bring it along for the initial push? (By the way, this isn’t the only bizarre trick utilizing basketballs.)

To wrap this article up (and honor the rule of three) here’s the last cool thing I learned about Junkrat’s traps, and it coincides with my other class main: Mercy’s damage boost works on them so long as she’s boosting Junkrat at the moment they go off. Considering the conc grenade goes from 120 to 156 damage, that makes it possible to one-shot squishy classes like Tracer from full HP. Notably, the testers found that the Riptire ult is hard-coded as an exception, which is probably a safe choice.

Phovos reviews Overwatch – Getting into our heads!

How to Git Gud at Lucioball 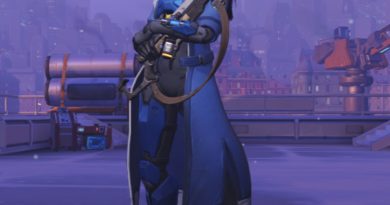